lxbean was arrested yesterday for observing the police accosting a drug user passed out near her front steps*. Reading her story it's amazing and frightening how quickly things go from "fine" to "put your hands behind your back!" and how bad these people were at de-escalation. They kept her in handcuffs for three hours before letting her go, hoping, I suppose, that she'd learned a lesson about standing up for other people. I'm glad she's not willing to let them get away with it. Advice, contacts, sympathy, and story sharing on her blog.


* I think she was actually arrested because she asked for the name of an officer she thought was behaving too aggressively, but that's not what it said on the court papers.. 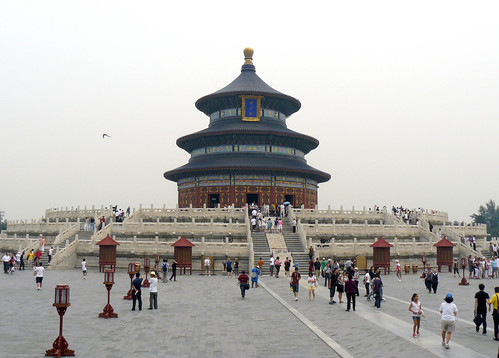 I know, I know - China was so last month! I have photos from Portugal, but unfortunately I brought neither power adaptor nor computer cable for my camera, so those images are still waiting to be processed. But here are some images from famous places in Beijing that I visited for the first time, or that I have not visited in 10 years. The first is the Temple of Heaven, conveniently located near my hotel (the one I stayed in after I returned from Singapore). I call it the "Great Cookie Jar," because to me it does kind of look like a cookie jar. Plus, it's the place where the emperor and his retinue used to go to pray for good harvests. This building, the most famous Temple of Heaven building, is actually the Hall of Prayer for Good Harvests. 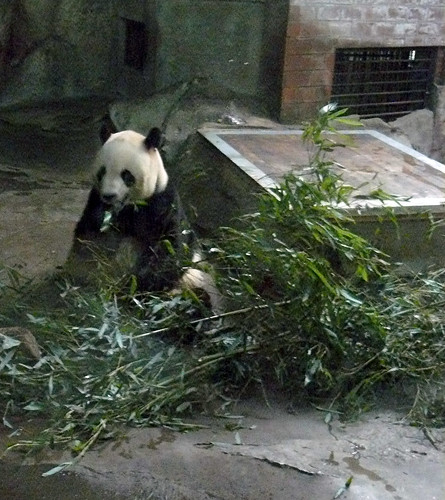 I went to the Beijing Zoo for the first time ever to see the pandas. The pandas were not too exciting, but the firefoxes were adorable. You have to click on the cut to see the firefoxes.... 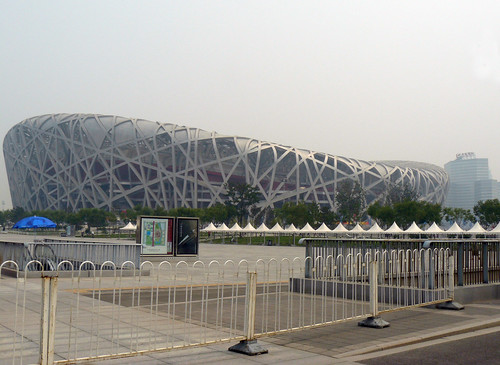 I also went to the Olympic "Green," which is completely paved over with concrete, to see the Birds Nest and the Water Cube. The site is pretty easily accessible by the new subway system. When I was last in Beijing (in 2005) there were two subway systems, and now there are 13. You have to think that the subway has transformed the lives of ordinary Beijingers for the better. At the Olympic Green you can go into the Bird's Nest (aka "National Stadium"), but sadly the Water Cube is closed for renovation. ( Collapse ) 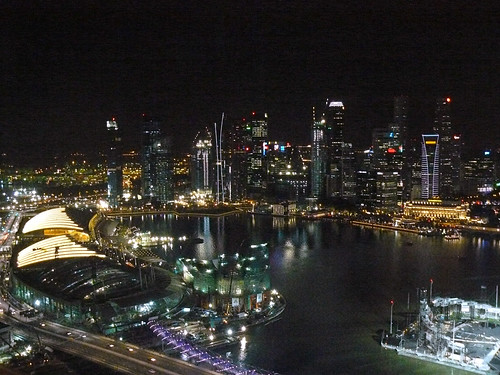 So New York New York is not the only town so nice they named it twice... there's also Singapore Singapore! I presented a paper at the 2010 International Communications Association conference there. I would describe it as a kinder, gentler Hong Kong where tolerance, civility and quality of life crimes are enforced by martial caning. 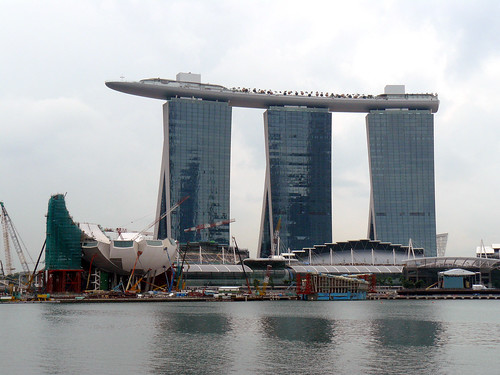 The first thing that caught my eye was this crazy-ass building that was built to look like three sail-shaped buildings supporting another building shaped like a boat. Of course, it's a casino! It opened for business while I was there, and I learned that you could go to the boat on top for about $40 and get a good look at the city. I also learned that, in an effort to stem gambling problems among the local populace, Singapore residents had to pay a $200 entrance fee to get into the casino. This fee is waived for foreigners. Sort of like an inverse of the Opium trade in Brit-controlled China. Perhaps the Singaporeans are getting even with us.( Collapse ) 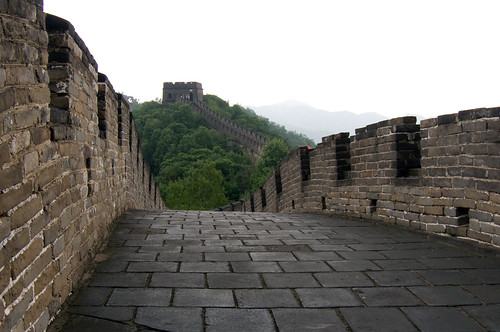 Well, I'm back from China and Singapore and still in the throes of jet lag. I have a couple of photo posts to process, but these are photos of my trip to the Great Wall Mutianyu. There are several Great Wall segments near Beijing, and I think I have been to most of them: Badaling, Mutianyu, Simitai, Huang Hua, Jinshanling. There are two more I have not visited. Any part of the Great Wall is fantastic, and they all have their own flavor. 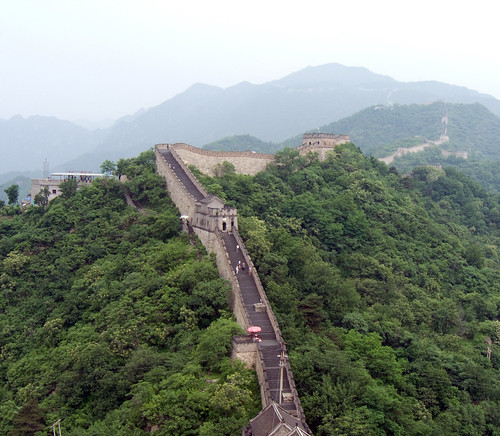 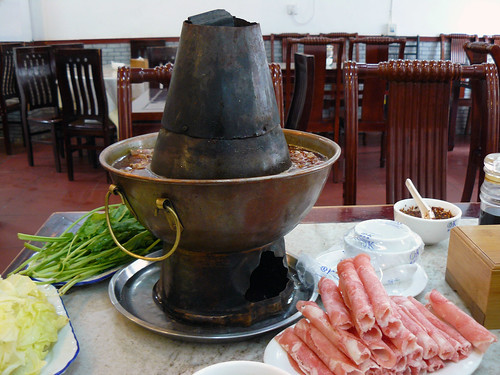 I just arrived in Singapore after spending a week in Beijing. The Chinese authorities block LiveJournal, FaceBook and Twitter, so I have not had access before now. But I have plenty of photos! Beijing seems to be a lot cleaner than it was when I last visited in 2005. The air and streets are cleaner, and there is more green thanks to the 2008 Olympics. When I took the taxi from the airport into Beijing I was amazed that I could smell - the delightful smell of tasty Chinese cooking, not pollution. So here is some of what I have been eating in Asia. WARNING: None of these dishes are vegetarian, although a couple claim to be.

The first is Mongolian Hot Pot, the most wonderful thing on earth. A spicy broth is prepared in a large brass cooker and brought to a roiling boil. You then dip raw vegetables, meats, tofu, you name it - into the broth and cook it for a couple of minutes. You then pluck your cooked food out of the vat (carefully, with chopsticks) and dip it into a sauce - usually a soy-peanut concoction. Then you eat it. Delicious! 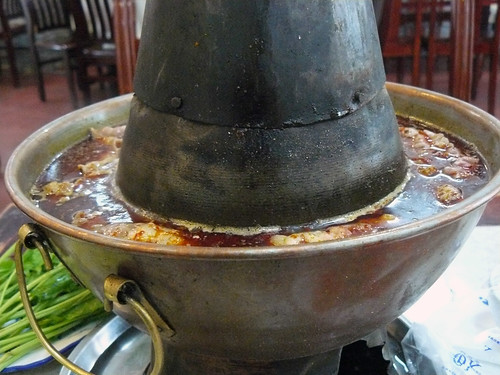 The best way to eat hot pot is on a very hot day, with very spicy broth, washed down with a cold beer. There is something heavenly about sweating inside and out along with the boiling vat. Maybe I will buy an electric hot pot for July 4, but as you can see it's not as exciting as a firey brass cauldron. ( Collapse )

This post is below the cut for those of you who have not seen the finale. I thought it was pretty good, but I am still processing it. SPOILERS AHEAD. BEWARE BEWARE.

I just concluded a Webinar on Social Media for New York Women Leaders in Higher Education for the New York State Network for Women Leaders in Higher Education. I presented a strategy talk to about 40 people via my computer and a system called Elluminate. The audience members could see me through a video window generated by the i-Sight camera built into my MacBook and hear me through the microphone that was built in to my MacBook. I gave a PowerPoint presentation that I interrupted from time to time as I demonstrated some of the features of FaceBook and Twitter on my computer, which the audience could also see. The audience primarily interacted with me via a chat room.

The whole presentation took about an hour. Afterwards the organizers told me that it seemed to be successful. It was a little odd for me, however, because I did not have any audio feedback from the audience while I was giving the presentation. We made a decision to mute everyone's microphone so that we would not get the bad kind of technical feedback, which would have made it hard to hear. This was the right decision, but it was still odd. At one point I looked at the clock, and noticed that I had been babbling on for 40 minutes! Still, it seemed to go over well. It's a really interesting platform.

* I was awarded a Penn Humanities Forum Mellon Regional Faculty Fellowship for the 2010-2011 academic year. That means I get to attend a research collquium every Tuesday at Penn (where lunch is served), and give a presentation on my research into how digital journalism increasingly shares some characteristics with video games, and how this development impacts the libertarian values of the press. It also comes with a small stipend. Yay!

* I was also awarded a Summer Research Award from Temple. This is money the university makes available to tenure-track assistant professors so that they do not have to teach in the summer months, but rather can focus on research. I am working on a comparison of international audio slide shows as part of this research. This money will mostly fund my conference travel to Singapore for ICA and Portugal for IAMCR this summer, so double yay!

* Gardening time is here! I am expanding the garden, with help from

kemidra. We will probably start to plant things around the first of April.

* I have been making a LOST supper every Tuesday night for me, Adrena and Tina, the lost fanatics of West Philadelphia. If you are in the neighborhood on Tuesday night and you like LOST, feel free to stop by.

[Edit @ 1:20pm] - I forgot to add, one of my beloved LOST podcasters was kind enough to make me a "Fellow" of the Black Rock LOST Podcast after he saw my announcement about the Penn Humanities Fellowship on FaceBook. Social media rocks!

Philadelphia was buried under more than three feet of snow last week. Temple actually cancelled classes for two days - Wednesday, the day of the storm, and Thursday, the day that the city dug itself out. I had breakfast at

lxbean's lovely house on Thursday, trudging through the still relatively undisturbed snowed upon streets of my neighborhood.

After breakfast and knitting and chatting, we all went out to dig out Alex's car. ( Collapse ) The final season of LOST begins in a couple of weeks, and they are starting to crank out the promos, such as this image of "The LOST Supper." The producers of LOST like to put hints of what is to come into their promos, so it's kind of fun to guess what they are getting at. It's interesting to note that Sayid is in the position occupied by Judas Iscariot in Leonardo's painting, and Jack is in the position of Thomas, aka "Doubting Thomas," the saint that Ben compared Jack to in Season 5.

In other news, one of my papers was accepted to ICA, so it looks like I am going to Singapore!

School starts next week at Temple. This week is when Temple has its annual teaching-learning conference, and I am attending a training session on Atlas.ti a comprehensive qualitative analysis software package.

The teaching conference was better than usual. The featured speaker was Ken Bain, who wrote a book with a stupid title: What the Best College Teachers Do. I have to say, tho, I enjoyed his presentation.

Bains had two main ideas that I took away with me: ( Collapse )
Collapse